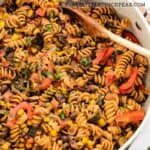 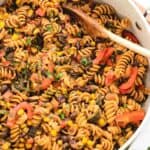 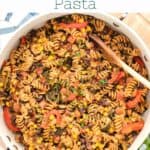 This website is a participant in the Amazon Services LLC Associates Program, an affiliate advertising program designed to provide a means for sites to earn advertising fees by advertising and linking to amazon.com.

This is an easy vegan southwest pasta dish that's perfect for a weeknight meal. Sometimes we just need a satisfying, filling, and super quick dinner idea so, I came up with this vegan one-pot pasta meal that only takes 20 minutes.

It’s a fuss-free dinner made with mainly pantry-stable items, plus frozen spinach and red bell pepper (gotta get those veggies in). It’s quick, easy cleanup, and most of the items can be bought well in advance. Just slice one red bell pepper, dump everything in a pot, simmer, and dinner is made!

What is Nutritional Yeast?

Nutritional yeast is a deactivated yeast that gives a nutty, cheesy-like flavor.  It’s used in vegan meals to sometimes add a cheesy savory flavor.  Although it's a yeast, it cannot be substituted with baker’s yeast (which is used as a leavening agent in baking bread).

If you're new to nutritional yeast, try cutting the suggested amount in half at first. You can always add more if you like it. I personally wasn't a fan at first but grew to love it (which I hear is quite common).

How to Make Southwest Pasta

2. Bring to a boil and simmer covered for about 10-15 minutes, or until the pasta is al dente and most of the water is gone.

3. First, check the pasta to see if it’s done at the time it recommends on the instructions on the packaged pasta.  If it’s not done, give it a couple more minutes.

I hope you enjoy this one-pot vegetarian pasta!

This is an easy vegan Southwest pasta dish for a fuss-free dinner made with mainly pantry-stable items, plus frozen spinach and red bell pepper.

Cooking times will vary depending on the type of pasta you are using.

I use this homemade salt-free chili powder, if your chili powder has salt you want to adjust the salt in the dish.  You can taste the pasta once it’s done, and you can always add more if it needs it.

I only tested with white and whole wheat pasta, not gluten-free pasta.