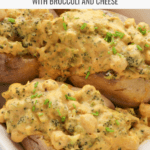 This website is a participant in the Amazon Services LLC Associates Program, an affiliate advertising program designed to provide a means for sites to earn advertising fees by advertising and linking to amazon.com.

This vegan stuffed potato recipe is filled with roasted broccoli and chickpeas. Then it's smothered and covered in a creamy vegan cheese sauce.

I had leftover vegan nacho cheese sauce and the idea of making cheesy potatoes with broccoli along with some leftover chickpeas for a simple meal.  It was a hit with the family so I wanted to share it.

The time may look daunting for these vegan stuffed baked potatoes, but most of the time it’s a hands-off recipe (except for making the cheese) since the potatoes and broccoli get roasted in the oven.  For an easier weeknight meal, make the cheese in advance.  If you freeze any leftover cheese it looks a bit grainy when defrosted, but once it gets heated back up the cheese comes back together.

Roast, sauté, or steam your broccoli for the stuffed potatoes.  I prefer to roast it.  I love the flavor it gives the cruciferous vegetable and it is hands-off.  The roasting caramelizes the natural sugars found in vegetables, creating more depth of flavor for these cheesy potatoes.

This recipe creates a lot of food and since vegan stuffed potatoes are so satiating I normally don’t serve them with anything else, except maybe a salad to get more veggies into my family’s diet.

How to Roast Broccoli for Vegan Stuffed Baked Potatoes

Preheat the oven to 425 F (220 C) and trim the broccoli into bite-size florets.  Then spread them out (don’t crowd them) on a baking tray and roast for about 20 minutes.  When the broccoli is done, it’ll be soft and the tips will start to brown.

The majority of the flavor for these stuffed baked potatoes and broccoli is coming from the cheese sauce, so there’s no need to season the veggies.  They’ll be covered in cheese!

How to Bake Potatoes

For these vegan stuffed potatoes start by preheating the oven to 425 F (220 C).  Scrub the potatoes to remove any dirt, then poke a few holes on each side of the potato with a fork.  Place the potatoes directly on the oven rack or a baking tray.

If you’re using oil on your potatoes, parchment paper or a silicone mat can help with cleaning up.  Depending on the size and type of potato you’re using, it will take 45-60 minutes.  For extra-large spuds, it may take longer than an hour.

Check for doneness by piercing them with a fork, the insides should be soft when pierced and have little resistance.

How to Microwave a Potato

Short on time to make your vegan stuffed baked potato?  Microwave your potatoes instead.  Scrub the potatoes then poke a few holes on each side of the potato.  Use a microwave-safe plate or Potato Express (a pouch made for cooking potatoes in the microwave).

The pouch cuts a couple of minutes off the microwave cooking time and the potato mess stays in the pouch.  Only microwave one to two large potatoes at a time for 4 minutes, then flip them over, and microwave for another 4 minutes.  Then two-minute increments until they’re done.

Large potatoes may take up to 10 minutes to cook.  They’re done when soft and have little resistance when pierced with a fork.  The skins will be softer using the microwave method and the insides will not be as fluffy.

Russet potatoes - I prefer Russets for this vegan stuffed potato recipe, their starchy insides make them fluffy when roasted in the oven.  I don’t use much oil in my cooking, but if you do and want a crispy potato skin try vegan butter or a high-heat oil rubbed on the outside of the potato to crisp up the skin.  Find potatoes that are about the same size so they cook evenly.

Broccoli - The vegetable can be substituted with any veggie that sounds good with vegan nacho cheese. The cooking time may need to be adjusted depending on what you substitute.

Chickpeas - Can be left out or substituted with another bean.  I use them a lot for their neutral flavor and because they go well with so many things.

Nacho cheese - I have a potato/carrot/cashew cheese sauce recipe below.  It can be prepared in advance and even frozen.

Pickled jalapeños - The pickled jalapeños in the recipe give the sauce tons of flavor.  They can usually be found near the jars of olives at the grocery store.  I don’t substitute with fresh peppers because the pickled ones give a more subtle jalapeño flavor with vinegary notes.  The brand will also vary in heat level, so start with less and add more if needed.  If you need a replacement or can’t find them, try adding your favorite salsa or just leave out the spicy element altogether.

I hope you enjoy this easy, filling, and dairy-free stuffed baked potato recipe!

This vegan stuffed potato recipe is filled with roasted broccoli and chickpeas. Then it's smothered and covered in a creamy vegan cheese sauce.

How long the potatoes take will vary because of their size.

I don’t use much oil in my cooking, but if you do and want a crispy potato skin try vegan butter or a high heat oil rubbed on the outside of the potato to crisp up the skin.

Find potatoes that are about the same size so they cook evenly.