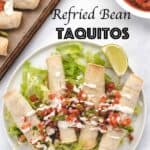 Homemade, oven-baked, oil-free refried bean taquitos!  They’re like little rolled-up tacos that can be filled with whatever your heart desires.  Spoon on your favorite topping for an easy meal or use them as an appetizer and dip into salsa, sour cream, cashew lime crema, or guacamole (vegan).

How to Make Refried Bean Taquitos

Make your own oil-free refried beans or use store-bought.  Be sure to check the ingredients if you buy them, not all refried beans are vegan.

Warm the corn tortillas in the microwave to soften them so they won’t crack while baking.  I find it easier to do 2 at a time between two damp paper towels on a microwave-safe plate.  If you do a lot at one time they’ll cool down and start to break while sitting on the baking tray waiting to go into the oven to be baked.  Work with tortillas right after you warm them up.

Place about two tablespoons of refried beans on the corn tortilla.  Spread it out but not all the way to the edge, when you start to roll the taquito it will spread the bean mixture even further.  Bring one of the edges over the filling and tuck it under itself and roll the rest of it.

Usually, taquito filling is placed in a line versus spreading it out.  When I tested the bean mixture that way it would leak out the ends while baking, so not as much filling could be used.  Also spreading the refried beans out works as glue to hold the tortilla together.

Leftovers can be frozen for later.  First flash freeze cooled taquitos by placing them on a baking tray, make sure they’re separated, and freeze.  When frozen, pop them off the tray into a freezer bag, now they won’t freeze together.  To reheat frozen taquitos, bake at 400 F (200 C) for 10-15 minutes.